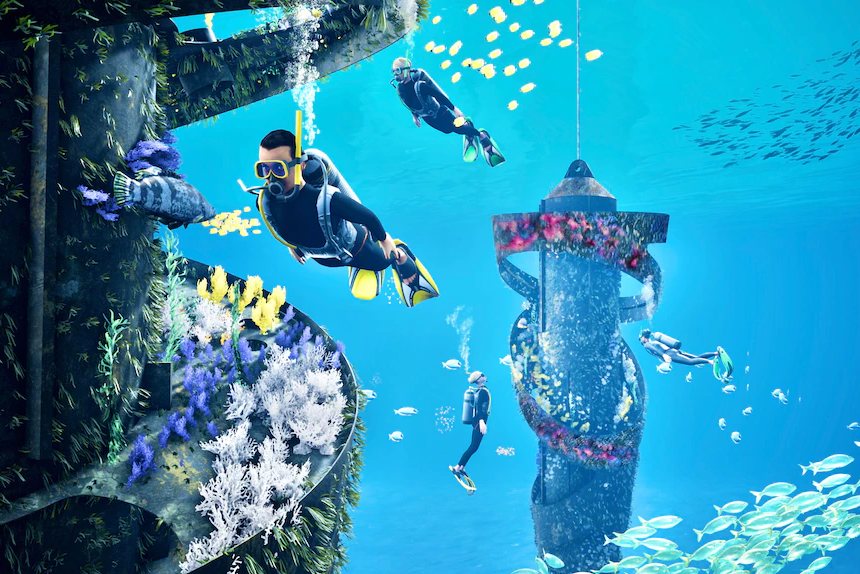 The $5 million dive attraction, named “Wonder Reef”, was today transported by barge to its site 2.5 kilometres off the Gold Coast’s Southport Spit.

The reef will consist of nine steel “twirling” structures anchored to the sea floor on concrete and steel pyramids.

According to Gold Coast Mayor Tom Tate, it’s the first of its kind and is expected to attract about 16,000 divers a year bringing “$32 million in tourism investment”.

“It’s the Gold Coast’s way of diversifying our tourism industry,” Cr Tate said. “It’s the first such man-made structural design for a dive site in the world and the way it twirls will entice and grow marine life”.

According to Cr Tate, once complete, the site will create a 32,000 cubic-metre marine habitat.

He said the attraction will have structures appropriate for both beginners and advanced divers.

“There’s different levels of diving. Beginners can use it to go down 10 metres,” he said.

“But if you’re a seasoned diver you can go all the way down to 30 metres, and all those critters will be there greeting you.”

Cr Tate said the Wonder Reef was just the first stage of the attraction, with plans to expand it. “We’ll see how this goes but I’d love to keep increasing it with others, just like a theme park underwater,” he said.

The structure is a 20-minute boat ride from the Southport Spit and is expected to be lowered into the ocean in days.

The reef is expected to open to the public by early next year.